Collinsville and the Collins Company

In 1826, Samuel Watkinson Collins, age 24, his brother David, age 21, and their wealthy cousin, William Wells, purchased a sawmill and gristmill property along the Farmington River in South Canton, and began mass-producing high-quality axes as The Collins Company.

The Collins Company produced 1,300 types of axes, pickaxes and other cutting tools, which were used during in significant periods of history such as, the California Gold Rush, construction of the Trans-Siberian Railroad, and the exploration of the North Pole by Admiral Peary in 1909. The U.S. Military also purchased millions of Collins tools for soldiers during WWI and WWII and subsequent wars.

As the business and number of factory laborers grew, the Collins brothers built housing, a Congregational church, bank, and other structures to support workers and their families – this section of Canton became known as Collinsville.

The former railroad line, which Sam Collins brought to Town and through the middle of the factory in 1850, has today been converted to the Farmington Valley Greenway Rail Trail (fchtrail.org) for recreational use. The 1935 Collins hydro powerhouse on the River, is currently being rebuilt to supply water-powered electricity back to the grid.

Collinsville, in the heart of Canton, Connecticut, is a treasure trove of victorian industrial innovation and history, and one of “America’s 10 Coolest Small Towns” as recognized in Arthur Frommer’s Budget Travel Magazine.

Come and experience Collinsville for yourself!

Learn more about our history at www.cantonmuseum.org 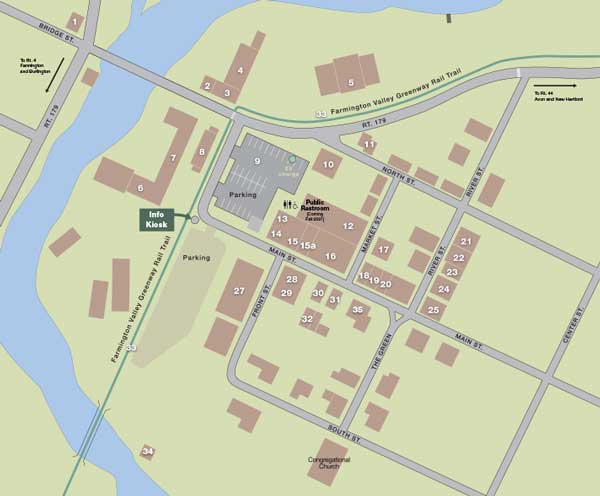